Listen to Dr Adam Trainer on ABC Radio as he delves into a collection of recently digitised cassette tapes – magnetic media which are highly vulnerable to deterioration – and reveals some special recordings by Josie Boyle, Nova Ensemble and Wild Palms.

The State Library keeps these collections in climate-controlled storage to stabilise their condition, but digitisation means that they have greater longevity and can be accessed online through the State Library catalogue.

Christine: So, History Repeated is celebrating and exploring cassette music. The State Library of WA is digitising its cassette collection, particularly its music cassettes and there are some really unique songs that you’re going to hear in just a moment. Adam Trainer is the Library’s Community Engagement Officer of WA music.

Christine: What did you sit by the radio to record?

Adam Trainer: Well, I remember back in my teens Top 40 radio would sometimes spin a new track and you know: “Call in, do you love it, do hate it?” And they played ‘Summer’ by Buffalo Tom which I loved but apparently everyone else hated it because they never played it again but thankfully, I got it on tape.

Christine: Ok, let’s have a listen.

Adam Trainer: Yes, for sure.

Christine: Yes, really good. Ah well, I mean look, their loss. So, look how diverse is the Library’s cassette collection? You’ve seen it in person.

Adam Trainer: I have, yes. I’ve been out to the stacks and trawled through. In terms of our West Australian music collection, we have 1400 West Australian music cassettes. We have even more cassettes which contain oral histories but we’re talking specifically about WA music today, so because cassettes and tape, anything magnetic media can deteriorate, it’s a priority for us to try and conserve it. So, that’s why we’re doing this digitisation at the moment because cassettes, if you leave them lying around... I mean, you know what it was like when you used to get your tape chewed in your tape player...

Christine: They were so fragile. You’d blow the wrong way and all of a sudden, they’re unwinding before your eyes...

Christine: Yes, you don’t want the cat near it either. So where are the stacks?

Adam Trainer: The stacks are out the back. We keep everything climate controlled and yes that’s where we have all of our heritage collections that need to be maintained in certain conditions. So, for example magnetic media or tape or other very fragile things, photographs for example we keep them in climate controlled storage. It might be 20 degrees, 10 degrees, sometimes even 3 degrees and then if you bring it out of that storage, you’ve got to gradually ease it into a temperature that’s fit for human interaction and then you ease it back in again when you lock it back away.

Christine: What happens if there’s ever a blackout? Are you on backup? Do you have backup generators?

Christine: [Astonishment] Aahh, crazy! That’s so nerdy but I just wanted to know.

So how does digitisation and reformatting work? How do you prioritise what is digitised?

Adam Trainer: Yes, well I mean look, essentially anything that is likely to deteriorate or is an unstable form of media is something that we will prioritise. So at the moment, that’s why we’re going through and doing our cassettes. So for example other recorded audio media:

Christine: I can tell you that CDs survive my black car, so yes, you can leave them for a little bit longer.

I want to know what you were sitting by the radio to record please. Tell me:
0437 922 720 and it looks like Guy from Karratha has something to add. Hello Guy.

Christine: Good! Tell me about your cassette tapes.

Guy: Well, I got a... like I used to go and see a lot of bands when I was... back in the day and I lived in Narrogin and one band that used to be around then was called ‘Subway’. I’ve got one of their tapes.

Guy: Yeah and it’s a local Narrogin band they had two cassettes. That one (the one I’ve got) and another one which I haven’t got but yeah, I’ve got that one and also I’ve got a 45 from a Perth band called ‘The Boys, When You Are Lonely’ and that you see... you can’t get it on iTunes, you can get none of these on iTunes or anything so... but you can get the Perth band. ‘The Boys’ you can look that up on YouTube it’s on there. So it’s the only way I can listen to it but I’ve got the perfect vinyl 45.

Christine: Look at that. I can see Adam Trainer in front of me scanning his brain. Have you heard of those bands?

Adam Trainer: Yes, I have. ‘The Boys’ especially. ‘When you’re Lonely’. What cracking track from the early 80s. That’s quite a score having an original 45 version of that. Probably would be worth a bit too.

Guy: I like it but it was like I said, pretty hard to listen to. I’ve tried to get a digital copy of it. That would be nice.

Adam Trainer: Yes, it’s on YouTube but the band hasn’t yet re-released their music digitally on Band Camp or anything like that.

Christine: Could you digitise what Guy has? Is there a possibility?

Adam Trainer: If Guy wanted to donate his copy to the State Library, then we could digitise it, but I reckon you should hang onto it Guy.

Christine: I think you should too Guy. Thanks for the call.

1300 222 720. Can I just say, whilst I’m doing a reset that those of you who’ve sent a text to say, “Is this Christine?” Yes, it is so Agent 967, yes.  Phil you’re good and also Steve in Port Gregory thank you for checking as well. Very considerate people making sure they’re not texting Illia.

So, you’ve picked a few songs that have been digitised. Shall we listen to this first one by Josie Boyle?

Christine: Here it is.

Christine: So that is from ‘The Parents Song’, is that right?

Adam Trainer: Yes, that’s right. That’s the name of the release. That track is called ‘Bonangee’. So Josie Wowolla Boyle was a Wonghi woman from the Wongutha nation in the Eastern Goldfields. She was an incredible storyteller and musician. She played in Perth and in the mid-nighteen eighties, at the North Perth ethnic music centre fairly often but she has done a lot of work around. She did a lot of work around cross-cultural, sharing of knowledge and was really at the forefront of sharing indigenous culture. She did a lot of work in schools and an incredible storyteller and a lovely voice too.

Christine: Yeah I agree. Josie Boyle. So you’ve got another one; Nova Ensemble. Who are they?

Adam Trainer: Nova Ensemble was formed in the mid 1980s by David Pye, a composer and a musician and it featured a sort of revolving line-up of West Australian musicians... of particular note in this iteration which is the Orchestra of the Global Nomads version of the band, is Lee Buddle who these days runs Crank Recording Studios, and Mark Cain who is a very well renowned saxophonist and global music aficionado, I guess.

Christine: Alright, well this track is called ‘Sunday in Bombay’. Let’s have a listen.

Adam Trainer: Now what I love about that track is it’s a live recording and there’s such urgency and passion to the playing you know. It’s quite incredible.

Christine: It’s really cool. I like the feel. You don’t hear anything like that at the moment at least and you’ve got another one for us. Tell us about ‘Wild Palms til my Arms’.

Adam Trainer: Yes sure, so ‘Wild Palms’ was sort of a side project I suppose. Craig Holdsworth fronted a number of very well renowned and much loved bands in Perth in the 1980s. ‘The Bamboos’ were probably the best known.

Wild Palms was as far as I can tell, a bit of a side project. It was just a bunch of mates who kind of got together in the studio and I guess the point I wanted to make in playing this track is that we have everything from super slick, very well produced commercially recorded, mixed mastered and sometimes charting bands. We’ve got Eurogliders, cassettes in the collection for example through to things like demo recordings which I think this Wild Palms recording is a great example of. A little bit rough and ready but really great music.

Adam Trainer: Yes, it’s great isn’t it? It’s got a great vibe. It’s a fantastic song. Craig’s an incredible song writer but, yes it was Tony Italiano started Pet Rock Studios. This was his four-track recorder I think in his home studio before he did that, so it’s part of the story of how certain musicians evolve or take little sort of side tangents between bands and those are the kinds of stories that we can kind of unearth in looking at West Australian music in all its iterations in our collections.

Christine: If anybody out there has cassette tapes that might be of worth, can they get in contact?

Adam Trainer: Absolutely! Again, if you’re prepared to donate your local music collection, then we’re very, very grateful. We might have it. If so, then you hang onto it but if we don’t, then yes stoked to receive people’s donated recordings. I love picking your brain when it comes to music. Adam thank you so much for coming on.

Christine: Adam Trainer. He is the Community Engagement Officer at the State Library of WA. WA Music is his specialty. Really great to hear those tracks, lesser-known tracks in fact. 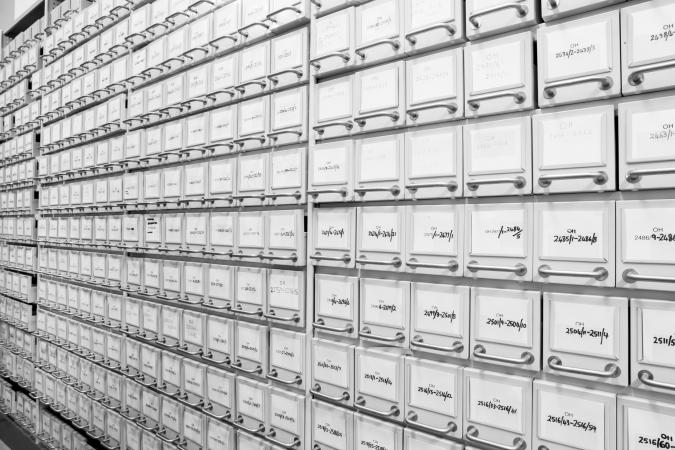 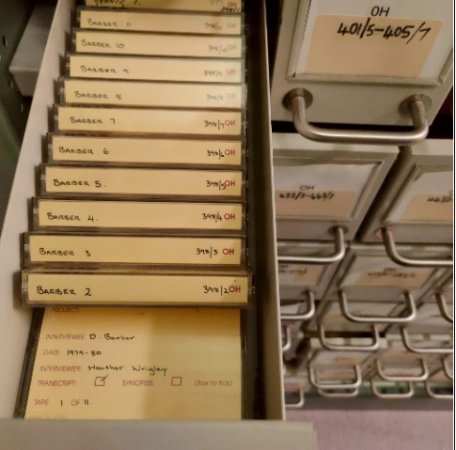 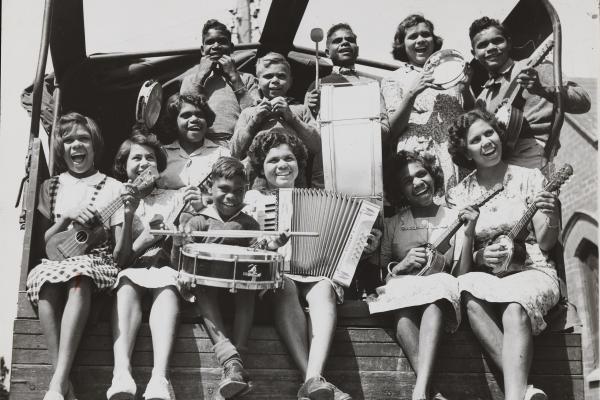 The State Library holds one of the largest, free, public music lending collections in Australia with over 70,000 scores and pieces of sheet music to borrow.
Find out more 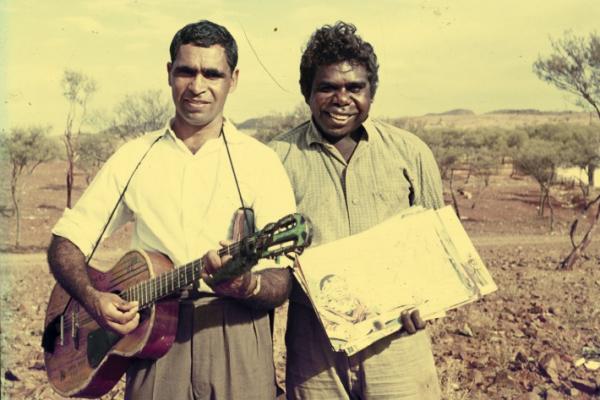 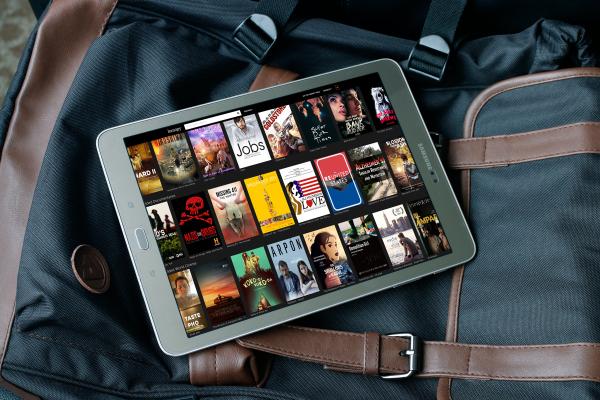