The Kay Poustie Scholarship supports the development of professional staff working in the Western Australian public library network and aims to enhance library services through evidence-based research and experiential learning experiences that contribute to the achievement of outcomes aligned to the WA Public Libraries Strategy 2022-2026.

The annual scholarship offers $5,000 to enable library professionals and practitioners to undertake research locally or internationally to experience innovative and best practice library services that have the potential to enhance the Western Australian public library network. Recipients of the scholarship are required to produce a research report and present their findings.

The State Library of Western Australia, Public Libraries WA Inc., ALIAWest and numerous personal donors are financial supporters of the scholarship. You can support the Kay Poustie Scholarship and read past research reports.

The 2022 Kay Poustie Scholarship is now closed for applications.

Applications for the 2023 Kay Poustie Scholarship will be aligned to the pillars of the WA Public Libraries Strategy 2022-2026:

The applicant will be required to:

A maximum of $5000 will be awarded to one applicant (an individual or a team) with the proposed use of the funds outlined in the Scholarship application. The funds may be applied to:

Scholarship recipients are required to detail any in-kind support sought or expected to receive.

Merit of the applicant

No late applications will be accepted and the decision of the Selection Panel is final. No correspondence will be entered into regarding the Selection Panel's decision.  Both the State Library of Western Australia and Public Libraries WA Inc. reserve the right not to award a Scholarship.

The 2022 Kay Poustie Scholarship is now closed for applications. 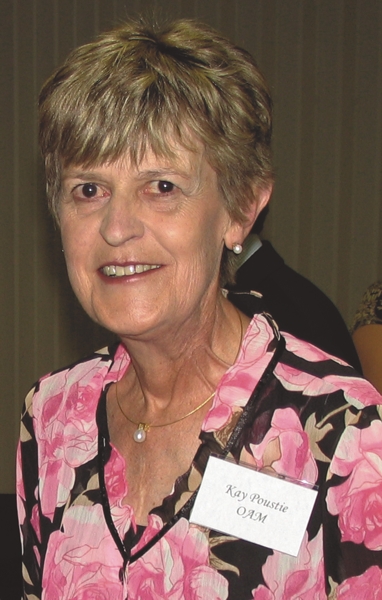 Kay Poustie OAM (1944–2009) Kay Poustie’s long and distinguished career in the library profession displayed her passion for libraries as a library manager, as a leader in the profession, and as a Member and later Chairman of the Library Board of Western Australia. In all these spheres she demonstrated hard work, dedication and a can-do attitude. As a librarian she was held in high regard by colleagues locally, nationally and internationally.

Kay began her career in Victoria before moving to Western Australia in 1978 where she had a 22-year association with the City of Stirling. In 1985 Kay became City Librarian and later Manager, Libraries, Arts and Culture, with responsibility for six public libraries, 85 staff, and a $4.5 million dollar budget, as well as community arts, exhibitions and cultural activities for the City. During this time all branches were automated, many of the libraries were relocated or renovated and she initiated a number of innovative programs.

Kay first joined the Library Board of Western Australia in 1990, serving until 1993 as a representative for the Local Government Association. She returned in 1998 and served for a further eight years as representative of the Australian Library and Information Association (ALIA). Her ability and experience was recognised when she was elected Chairman of the Library Board briefly in 2001, and then between 2002 and 2006.

During this time, Kay oversaw major developments in relations between the State Library and WA public libraries, including the signing of the Framework Agreement and the allocation of a further $10.3 million in state funds for library resources. Other achievements included the launch of the Better Beginnings program and the establishment of the Historical Records Rescue Consortium.

Kay was a role model and mentor for many members of the Western Australian public library profession. Her passion for library education saw her serve on the Australian Library and Information Association (ALIA) Board of Education, with four years as Chair, and in 1997 she was conferred with a Fellowship of the Association. She was invited to be an inaugural member of the Bertelsmann International Network of Public Libraries in 1996 contributing to scholarly research in the profession. Their objectives were “to pool international know-how, to strengthen the exchange of experience among public library experts, to develop successful concepts and above all, to promote their practical implementation”.

A lifelong contributor to non-profit ventures, Kay also served in a variety of roles as a member of Zonta International and also for Meath Care. In 2008 Kay was awarded the Medal of the Order of Australia, and in 2010 she was recognised as a Library Board of Western Australia Fellow.

Through her work with the Library Board of Western Australia, her long and successful association with City of Stirling libraries, and her commitment to fostering potential in library professionals, Kay Poustie’s legacy will live on.