The Madam Joan a sex worker in the 1940s

ABC Perth radio interview with Jules Kim, the CEO of the Scarlett Alliance, about Joan who was a sex worker and ran brothels in Perth in the 1940s to 50s.

In 1988, Chris Jefferey interviewed Joan about her life for the State Library of Western Australia's oral history collection, which she wanted to be released only after her death. Joan's colourful life came to an end in 1994. You can listen to Joan's interviews by searching the State Library catalogue for OH1978.

The below story about Joan's remarkable life is from the State Library's Facebook page. Follow us for more tales of Western Australia's fascinating history.

Joan was born in 1912. The daughter of an assayer in the tin mines and an only child.

She did not remember much of her early life, except that she left Tasmania for Sydney when she was fifteen to live with her aunt. She worked as a waitress and at 17 years old met her first husband.

They had no children and were married for fourteen years, during which time Joan became a professional prostitute. She couldn’t remember why – “It was just one of those things.”

Joan’s occupation took her to Little Lonsdale Street in Melbourne. Then during the war in 1941 to Hay Street in Kalgoorlie. Her husband accompanied her to Western Australia and worked as a barman.

Joan’s work was very busy on the pay weekends – up to twenty clients a night – mostly miners and men working on the wood line. It was very quiet on the off times. Ten shillings for half an hour, a pound for an hour.

When interviewed in 1988, Joan remembered the house as being “very nice, very comfortable, carpets, comfortable beds, very clean. There was a housemaid. You visited the doctor. There was everything that was needed, just like an ordinary home, a comfortable home.”

Her madam’s name was Kathleen.

Prostitutes were a little bit ostracised in Kalgoorlie, and there was no time for leisure.

So, after a few months, Joan was ready to go somewhere else - Perth. Here her husband found work as a radio operator.

After a much needed month’s holiday, Joan set out to find herself a job. In 1941 there were about ten houses and ten madams in Perth and after applying at several houses, she went to work for a woman called Mary on Roe Street.

The house was similar to the one in Kalgoorlie, just older.

“It had one, two, three, four, about five rooms (one for each of the girls). There was a housemaid, laundress, night-woman, yardman and a cook."

Joan, who was now 30 years old, got on well with the other girls, and Mary was a "good boss".

“The average girl would work possibly just the night shift, but I was greedy.”

When a client arrived, he would choose the girl of his choice and pay the fee in advance. "Then you examined him, washed him, had intercourse, washed him again and washed yourself.”

A girl always had the right to refuse any man if she didn't like the look of him or had reason to be nervous when she examined him. She'd simply give him back his money.

According to Joan contraception was rarely used. “It didn’t seem to be necessary, grass doesn’t grow on a well-worn track (laughter)”. Some girls brought their own “French letters”, but men were not expected to use them. Though sometimes they wanted to, particularly if they were married.

Joan worked for about a year at Mary’s, then was approached by a man to run a house. She met the madam and was given a house at the far western end of Roe Street until the war ended.

Joan looked after four girls aged from about 24 to 46 years (the minimum age was 21). Later on, when she had two houses, she looked after eleven. Some girls were married, some were separated, some had children to support. Most came from the eastern states. All were in it for the money.

The girls were known by nom de plumes to remain anonymous, and they didn’t live in the house, as it would have been “a little dangerous”.

There were a lot of convoys going through Perth during the war years. According to Joan when the New Zealand convoys came, they caused a great deal of trouble - "get half drunk and go crazy". The brothels on Roe Street would close!

The rest of them, the Americans, English, Malays, Chinese and Dutch “were alright”. It was quite a diverse mix, but their sexual practices were "all about the same" and all the men "just glad to see a woman".

Now and again an (American) aircraft carrier would arrive in Fremantle - "Boy that was business. We were dead when they were gone!”.

Joan’s dealings with Beaufort Street police were always good and cooperative. Although prostitution was illegal, it was tolerated, and Joan was a born diplomat.

She was also proud of her girls. When clients came in, they would arrange themselves round the lounge room in outfits chosen by Joan.

“I had them in strapless bras and little frilly pants, and by gee they looked nice, they looked lovely. I picked out those clothes myself."

Quite a few of Joan's girls married farmers and moved to the country, and as time went by, people’s attitudes to brothels became better, as there was more tolerance of sex in general.

On VJ (Victory over Japan Day), Joan left for London. She started in the same business, only it was street walking round Piccadilly. She divorced her first husband and re-married a French Canadian. They moved to Canada but never had any money and Joan went back to being a call girl.

Eventually they returned to Western Australia. Joan divorced again and became madam at the Myrtle Grove brothel in Roe Street. Girls would often leave when a new madam came in, so Joan finished up with only two girls and worked herself.

“I made more money that winter than the first madam had made all summer with five girls!”

In 1958 all the houses in Roe Street were forced to close. Many of the girls went back over east, and Joan was out of it, "finished”.

Progressively the houses were knocked down, leaving little trace of the street’s colourful past.

For Joan prostitution had simply become a way of life..

"There was money, there was a lot of humour, which you don’t get in any other life. You never knew who was going to come into the house. It was interesting. You met a lot of people from different walks of life. In fact, when the street closed that was the only thing I missed about it. I missed the public. That’s about all really.”

Joan’s colourful life came to an end in 1994, after which time she agreed that her story be shared. 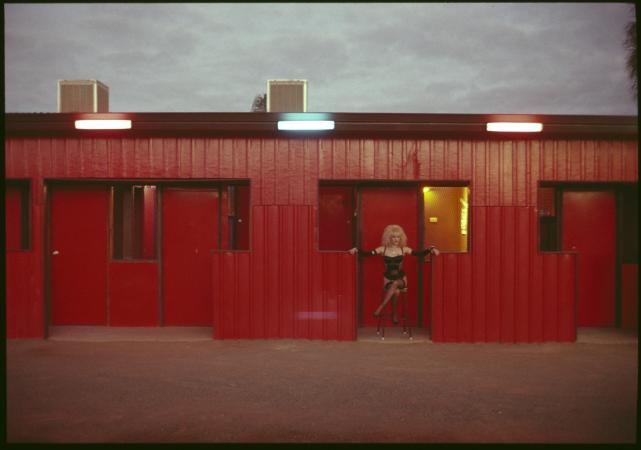 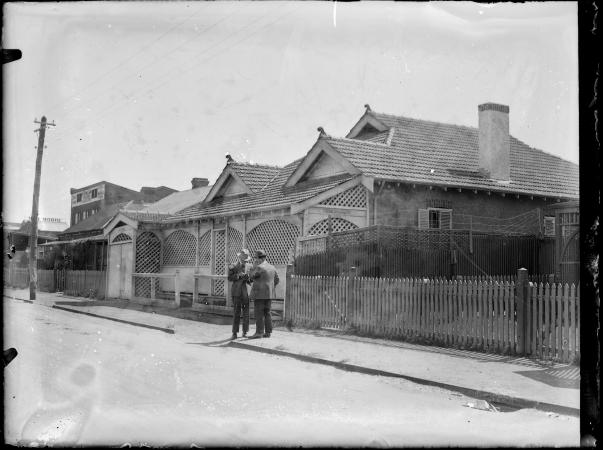 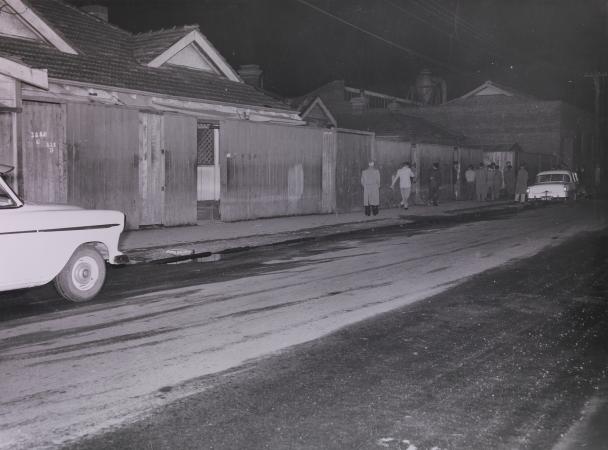 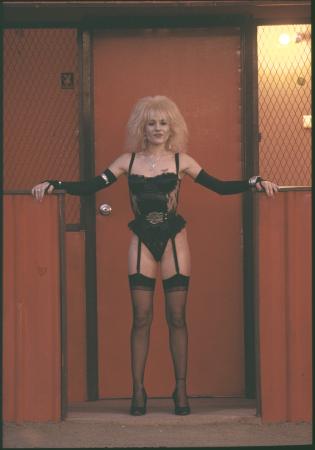 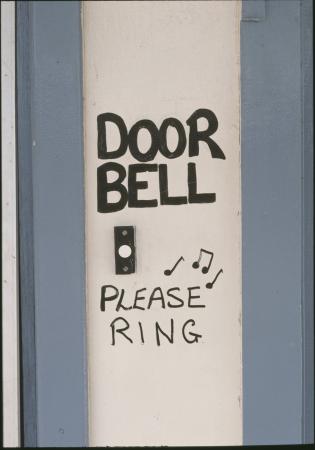 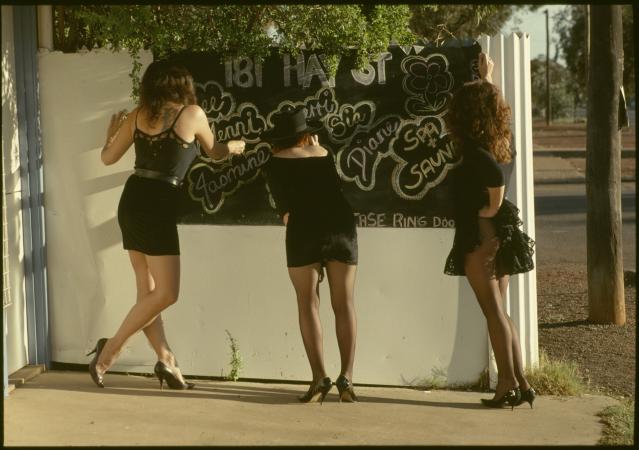 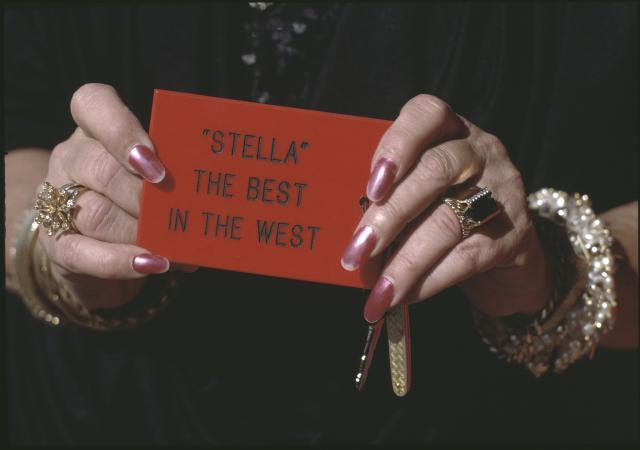 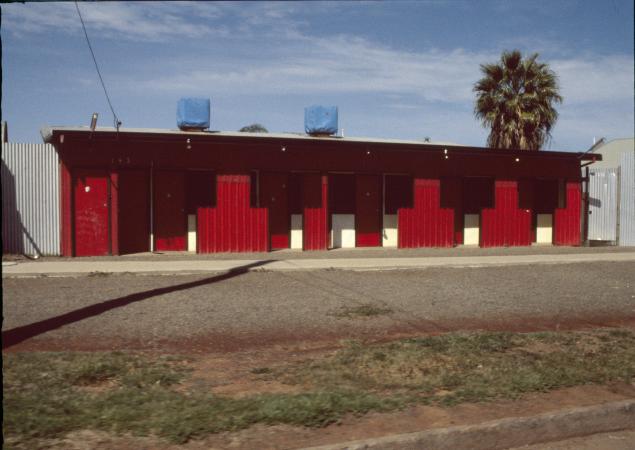