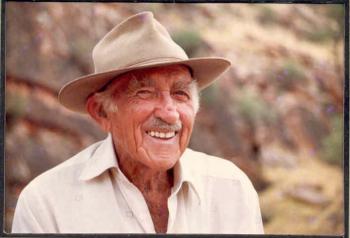 Xavier Herbert (15 May 1901 – 10 November 1984) was born Alfred Jackson in Geraldton, Western Australia. The family moved to Fremantle when he was 12. At 14, he started work in a chemist shop while continuing at school, with the aim of becoming a pharmacist. He moved to Melbourne after World War I to study medicine.

His writing career began while in Melbourne and his first story was published in the Australian Journal under the pseudonym ‘Herbert Astor’. He travelled to London in 1930 and met Sadie Norden, who became his wife. In the two years he spent there, he wrote the first draft of Capricornia, which did not see print until 1938.

In the years that followed, he wrote a lot but published little until the end of the 1950s. His major novel from this period, Poor Fellow My Country, won the Miles Franklin Award in 1975. At 1,463 pages and 850,000 words, it is one of the longest novels ever published in English.