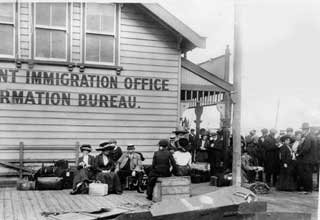 Before the Commonwealth of Australia came into being in 1901, immigration to Western Australia was the responsibility of the Western Australian Government. Early references to immigration can be found in Colonial Secretary’s Office records, and can include passenger lists, naturalisation documents and files relating to aliens.

After 1901, immigration became a Commonwealth responsibility and records relating to immigration for this period can be found at the National Archives of Australia. The State Library and the State Records Office have microfilm copies of passenger lists from 1897-1963 (State Library - Fremantle 1897-1963; State Records Office – Fremantle up to 1915 and Albany up to 1932).

The records listed below are immigration records which are, in the main, not part of any agency series. For other records which can relate to immigration check under the headings Aliens, Asian People, Child Evacuees & Migrants, Colonial Secretary's Office, Naturalisation, Parkhurst Boys and Passenger Lists in Government Archival Records and Asian People, Child Migrants, Parkhurst Boys and Passenger Lists in Private Archives.