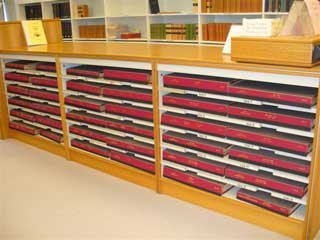 The records contain letters, reports etc., to the Colonial Secretary from both officials and settlers. These deal with many aspects of administrative and social life in the colony. There are also letters from private organisations and societies. Letters from officials include, but are not limited to, departmental correspondence, annual reports, quarterly returns, and special reports. Letters from settlers are full of human interest, especially in the early years of the colony. e.g., applications for assistance or employment. Letters from private settlers decreased in proportion to those from officials as the colony developed.

Inward letters are divided into 3 distinct series: 1828-1878, in which letters are bound in rough subject and chronological order (these are microfilmed in 906 volumes and a listing of volumes showing subjects and dates covered by each volume can be found in AN 24/1); 1878-1883, a subject file system; and 1883-1973, an annual single numbering file system. These systems are explained at the start of AN 24. For 1828-1878 nearly all letters have survived, after this date many of the letters and files are missing, either lost or destroyed.

Copies of all outward letters sent by the Colonial Secretary’s Office 1829-1899 were entered in letter books. The outward letters consist largely of replies to inward correspondence already discussed, so the subject matter is similar, with, in addition, instructions to department heads on administrative matters, requests for specific information or reports and transmission of orders or notices received from the Colonial Office in London. From 1895 outward correspondence can also be included with the inward correspondence, and this is always the case after 1899.

Indexes and registers are held for both inward (1829-1918) and outward (1829-1878) correspondence. From 1878 outward correspondence is included with the inward correspondence indexes (a complete listing of indexes and registers can be found in AN 24/2). Useful headings to check are Aborigines, aliens, i.e., non-English immigrants, Comptroller General (for convicts), ecclesiastical, Emigration Commissioners, exploration, immigration, judicial, land, lunatics, magistracy, medical, military, pensioners, paupers, police, Police Magistrates, Resident Magistrates (for various districts), Rottnest, shipping, vaccination, volunteers. All of these may provide the names of people and correspondence by and about people. This is by no means an exhaustive list of subject headings. Correspondence from settlers can be accessed under their surname (until 1883).

From 2007 the State Records Office, through funding supplied by the Friends of Battye Library Inc., undertook a project to list the correspondence files of the Colonial Secretary’s Office from 1883-1918 to improve access to this valuable research resource (the files contain extensive references to the names of officials, settlers and Aboriginal people). These files are now searchable through the State Records Office Catalogue. A listing of all files held for 1919-1973 had previously been compiled by the State Records Office and can be located in AN 24/3).