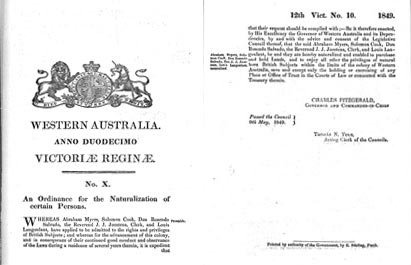 12 Victoria no. 10 - An Ordinance for the
Naturalisation of Certain Persons

Records dealing with the naturalisation of non-British immigrants may be relevant. Prior to 1871 an act of the Legislative Council was required for naturalisation and these can be found in the Western Australian Acts of Council. Thirty nine men were naturalised by twenty seven acts passed between 1841 and 1871.

The Naturalisation Act of 1871 provided for the granting of a certificate of naturalisation to any alien who requested it by means of a memorial to the Governor, and who then took the prescribed oath. The memorial required the applicant to state his age, occupation, duration of residence in colony, and all other grounds on which naturalisation might be sought. These certificates were recorded at the Supreme Court. Some applications or memorials survive in CSO records (check CSO indexes under subject headings aliens, immigration and naturalisation). They usually provide the memorialist's age in years rather than date of birth. Occupation and place of residence are stated, with some providing nationality or country or town of birth. Length of residence in the colony is sometimes stated in number of years, sometimes the actual date of arrival is recorded. Some petitioners give other reasons such as their wish to buy shares or their desire to seek election in local government.

In the later 1880s there were a considerable number of Asian applicants for naturalisation. After 1890 the number of applications increased greatly due to immigration to the goldfields. In 1903 Commonwealth legislation superseded the State Act of 1871. Records for the post-1903 period can be found at the Australian Archives.

Useful for finding names of those naturalised are: