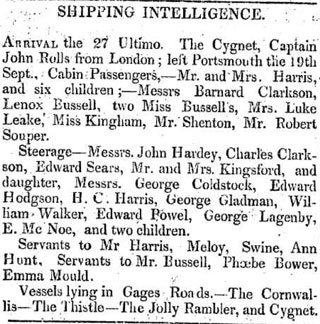 Early passenger lists appear in Colonial Secretary’s Office records (1829-1878) and in newspapers (lists sometimes only provide the names of cabin passengers, but not steerage passengers). They have been indexed up to the year 1890 (see Arrivals in section Indexes and Catalogues). There are also several distinct series of passenger lists, generally for the post-1890 period, which are useful for searching for the names of people arriving in Western Australia.

Inward Passenger manifests for Ships and Aircraft arriving at Fremantle and Perth Airport 1898-1963 are held in the Battye Library (further microfilm copies of passenger lists will be received as they become available). The passenger lists are arranged in chronological order of arrival of ships 1898-1963 and aircraft 1952-1963 interfiled (note: during 1945 a number of military flights ferried passengers and military personnel into Perth - these were usually Catalinas or Liberators which are denoted by a 5 letter call sign, e.g., G.AGUK, G.AGFM). Two indexes, one chronological and one alphabetical by name of ship, are held by the Battye Library.

Some passenger arrivals appear in Agency series, such as Police Station records of people arriving at a particular place by ship, road or rail. Most of these records only provide the name of the person, date of arrival, ship arrived on (if by sea) and occasionally where from. If the record is a Police Station Occurrence Book, then the names of passengers will be in the entry for the day of arrival. Some Books also note travelers passing through the town or district.