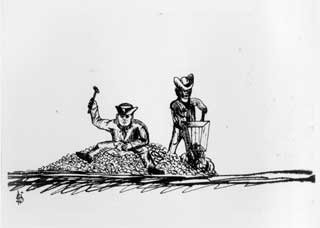 Among the most useful records are the Convict Lists and Registers (ACC 128), the Occurrence Books for various convict working parties (ACC 1156/Occurrence book 1-27), Registers of Casual Sick, Medical Registers and Journals, the Convict Registers (ACC 1156/R1-R33) and Receipts and Discharges of Prisoners (ACC 1156/R&D 1A-9B). Explanations and detailed listings of these records can be found in Convict Records of Western Australia: a research guide, AN 358 and Agency 442. Also of use are the Supreme Court records (see Agency 44 and Order in the Court ) as many Supreme Court records relate to convicts.

Many police and court records refer to convicts, not only those transported from England but also those convicted in Western Australia. Records relating to ticket of leave holders can provide convict number, name, date of arrival in district, employer's name and address, ticket holder's address, date and departure from district and where departed to. Other records found are:

Please also consult the State Records Office staff for further information about resources listed above without an online link.