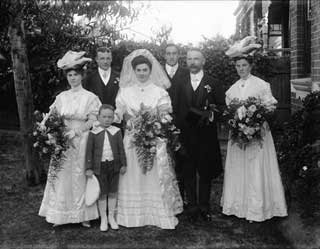 The records listed in this section are those located in non-denominational or non-official church records (other records which may provide similar information can be located under the headings Church Records and Cemeteries). The majority of the records are registers of baptisms, burials and marriages. Baptismal registers can contain such information as name of person baptised, dates of baptism and birth, name of child, parents' names and professions, place of birth and name of baptismal minister. Burial registers can contain such information as dates of burial and death, name of person buried, age, place of residence, occupation, cause of death, where buried and name of officiating minister. Marriage registers can contain such information as names of people being married, when and where married, ages, condition (i.e., bachelor or spinster), occupation, place and length of residence, father's name and occupation, impediments to marriage and name of officiating minister. Not all registers give such comprehensive information. The records relate to various places as follows:

ACC 3461A/3: Broome Japanese Cemetery deaths 1896-1905
Contains 122 deaths of Japanese people with name, cause of death, profession and witnesses.

ACC 3461A/3: Deaths of Japanese people recorded at Derby 1894-1899
Contains 27 deaths with name, cause of death, profession and witnesses.

ACC 6809A/1: Births, Deaths and Marriages at Perth 1829-1834
The entries in this book were copied by James Brown, Colonial Chaplain, in 1872 from entries made and certified by the Rev. J.B. Wittenoom, Colonial Chaplain. Contains baptisms 6 December 1829–29 September 1834 (shows date, child’s name, parents, date of birth, birthplace, father's occupation and by whom baptised); marriages solemnised at Perth in Western Australia 18 January 1830–27 August 1834; burials at Perth 6 January 1830–10 September 1834 (shows date, name, age, places of birth and abode, profession and by whom buried).