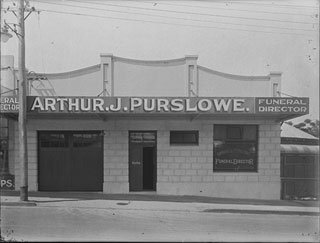 ACC 6855A/1-151: Records of Mead, Son & Co, Funeral Directors 1927-1994
This firm was founded in Busselton in 1910 by Frank Mead. In 1926 the firm relocated to Victoria Park and also opened a branch in East Fremantle. The business was purchased by Chipper and Son in 1994. The records consist of death and funeral registration records, which include details such as the deceased’s profession, last address, birthplace, length of time in Western Australia, parents’ names (including mother’s maiden name) and professions, children’s names, place of burial and marriage details. Birth record cards for stillborn children may be included. From 1956 funeral notices, wreaths and associated costs are included. A listing of records can be found in MN 2561.