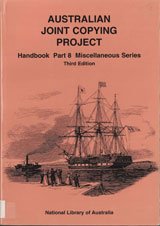 In 1939 the Commonwealth National Library (now the National Library of Australia) and the Public Library of New South Wales jointly made proposals for the copying of material at the Public Record Office (PRO) in London. The PRO is now called the National Archives. Due to the war, it was October 1945 before an agreement was reached whereby the microfilming of material relating to Australia held in the PRO could begin.

Filming began in August 1948 and for the first ten years the work of the project was confined entirely to the PRO, chiefly the Colonial Office. In 1960, the Australian Joint Copying Project (as it is known), came under the direction of Phyllis Mander-Jones and she concentrated on private records of Australasian interest throughout the British Isles.

In 1972 Manuscripts in the British Isles relating to Australia, New Zealand and the Pacific (016.99 JON) was published, which resulted in microfilm being produced of records located in many of the smaller and lesser-known repositories in Britain and Ireland. This publication is useful for subject access to the microfilm, as the handbooks do not allow this.

The handbooks produced are as follows:

Board of Trade, Treasury, Exchequer and Audit Department, Privy Council, Board of Longitude (part 6)

Battye Library attempts to acquire all microfilm which relates to Western Australia and the State Library has acquired most of the other PRO microfilm. However, few reels are held of the Miscellaneous and Personal series.

Gillian O'Mara, in Convict Records of Western Australia (929.1072 OMA), has produced a listing of documents relating to convicts which can be found in the various offices of the PRO. Following is a summary of material of Western Australian interest by handbook. A 2016 update of this book is available on the Friends of Battye Library Inc. website.

Please see our page about national archives and public records where you will find more AJCP information, tips, and tools for navigating around this immense resource.